Thanks & A Book Review

First of all, I want to say thank you for all of the thoughts, concern, prayers, and support from yesterday.  After being able to get everything out to you guys, having some comforting time with the hubs last night, and spending lots of time in prayer I am feeling renewed. I knew that those emotions would pass quickly and I would be good as new again. So, I understand the concerns many of you expressed that I was stressing too much about all of this. However, I assure you that is not the case. Yesterday was by far the worst of it. And for those of you who have actually tried conceiving, I know you can relate. Emotions will be strong every now and again. Not always, but sometimes and I was at that sometimes yesterday. Plus, you have to consider, when you find out you aren’t pregant…it’s likely you are PMS’ing! Someone tell me how fair that is?! 😉 😀 So, in short, I am back to feeling normal and am at peace with it all. All I can do is go through the motions and trust. Part of my devotional reading this morning said it best:

Communion with God can combat hopelessness. Prayer moves our attention to the Father’s deep love for us, the Son’s sacrifice on our behalf, and the Spirit’s reassuring presence. If we become willing…to surrender personal desires [to God], peace will be ours.

Onto lighter stuff, shall we? Last week I finished reading another Nicholas Sparks book – The Last Song by Nicholas Sparks. This is hew newest book and I was surprised when it became available to me at the library. I was on a 100+ person waiting list and even though I had just finished Dear John by Nicholas Sparks (review here), I was excited to read it. 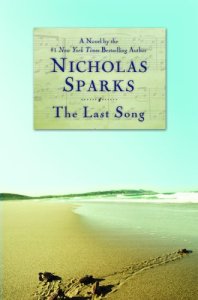 As I mentioned before, Nicholas Sparks is know for his novels of the drama involved in love and heartache. Think The Notebook, Message in a Bottle, and A Walk to Remember – all books of his made into major motion pictures. The Last Song of course continued in this tradition, but with a slight twist. The Last Song is about a rebellious seventeen year old girl named Ronnie (short for Veronica) who is sent to North Carolina to spend the summer with her father, from whom she is very estranged and has a suffering relationship. While visiting her father, she encounters many different life lessons. From meeting another young man and beginning to fall in love, to learning about her father, and battling some stress in her own life and her troublesome past.

I have to admit, The Last Song did not start out as strong as I hoped. I had high expectations because the description of the book sounded rather compelling and most of Nicholas Sparks’ books will draw you in right from the beginning. It took me longer to get into this one. I’m used to the relationships between the characters being displayed in powerful and engaging ways right from the beginning, and more often than not, the relationships that receive the focus in his books are the love affairs. The way Ronnie and Will’s relationship came about was honestly kind of boring and didn’t really compare to other novels of his. I didn’t really care about it. At first, I thought this was a bad thing because it wasn’t what I was expecting.

Then, as the book continued, I realized the biggest component of this novel was the changing relationship between Ronnie and her father. Perhaps it was because I could completely relate to a changing relationship between a father and daughter, as I too was very distant and downright hateful of my father until about 5 years ago (Iwas hurt a LOT emotionally by him growing up and he is what ultimately led to the depression I battled back then). The love story of this novel is without a doubt the love between family. I won’t go into too much detail so as not to spoil the ending, but I can say it is done in typical Nicholas Sparks form. As always the book is written beautifully, is easy to follow along, a quick read, and very enjoyable. It wasn’t my favorite but I would still recommend it. 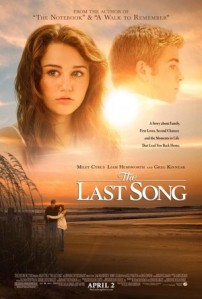 …the making of this book into a movie with Miley Cirus as the main character. *rolling eyes*

Something to not roll your eyes at – two cool giveaways: Lisa from I’m An Okie and Kristin from Iowa Girl Eats are both having awesome giveaways.

This entry was posted in Uncategorized. Bookmark the permalink.

17 Responses to Thanks & A Book Review